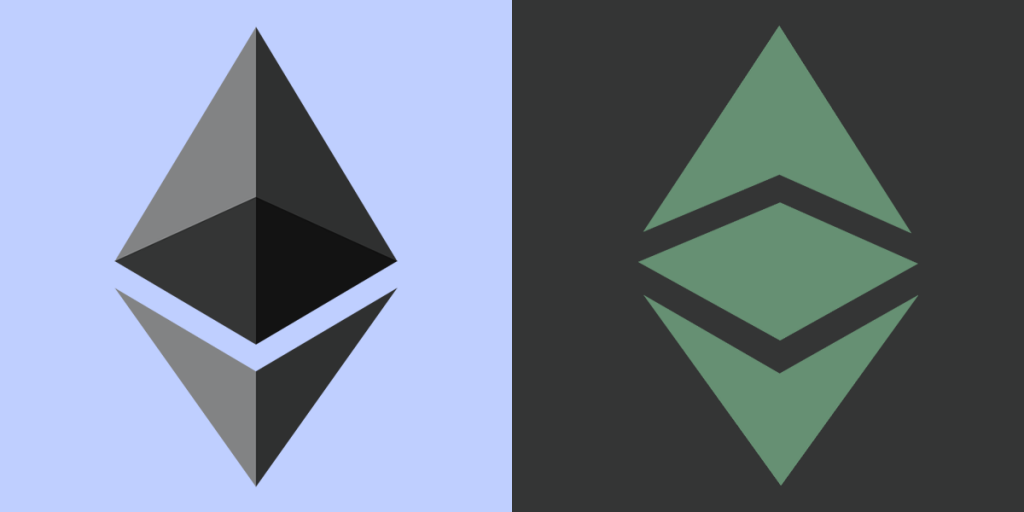 Ethereum and Ethereum Classic are similar names and they both have a complex common history… What separates the two cryptos?

What’s the difference between Ethereum and Ethereum Classic, and how did we end up with a common name for two cryptocurrencies? Is there a fractured group of bitter rivals out there throwing shades at each other after violently disagreeing on the future of blockchain?

Well, it’s a complex story, one that prove humans will can still play an important role in any platform’s future…even in a decentralized space and code is not inherently “law.”

There was a time, as you would guess, when only one Ethereum ecosystem existed. A hard fork emerged during one of the most critical events in cryptocurrency history, producing two separate implementations of the blockchain network.

The history of the original Ethereum network started back in 2013, when Vitalik Buterin’s proposal for a new programming language did not gain much traction inside the Bitcoin community.,

Buterin argued for a new programming language to be generated by Bitcoin that could automate tasks and allow apps to be built on top of its blockchain.

He went ahead to raise funds through a crowdsale since there was no much interest in his idea. One of the biggest crypto fundraising campaigns, amassing 25,000 BTC with a market capitalization of $17 million at the time, took place in July 2014.

The platform allowed the development of decentralized smart contracts, which are mainly agreements between two parties that are written in code. Once the conditions in the agreement are met, the contract is processed automatically by the blockchain. Smart contracts are very appealing to many businesses because of the combination of blockchain’s immutability, teamed with its open-source functionality.

However, fast forward to summer 2016, and one of the most spectacular crypto attacks in history unfolded, altering the course of Ethereum for life. The most suitable course of action was considered a hard fork, with most developers opting to upgrade to Ethereum. This left the original blockchain out in the cold to find its own course, now known as the Ethereum Classic. All this chaos was ignited by the decentralized autonomous organization.

In its core, a highly promising concept was the DAO (which stood for decentralized, autonomous organization), giving many would-be investors and entrepreneurs an opportunity to pitch and back proposals, with both sides reaping the benefits if they were effective.

It was basically a decentralized Kickstarter that used the Ethereum blockchain and operated via a set of smart contracts and worked by a series of smart contracts. In April 2016, it raised more than $150 million or 12.7 million Ethers, making it one of the biggest crowd funding campaigns in history.

To get engaged, you needed to purchase DAO tokens using Ether. Then you could use your tokens to vote on whether to support a particular decentralized application (DApps). A share of the investment funds from the DAO would be awarded to projects that earned more than 20 percent of the community support.

The DAO was a good way to promote Decentralized Investment- preventing management types from making a final decision as to who received funding but there were some significant weaknesses which would eventually lead to its demise.

The “Split Function,” which was developed as a way to allow an investor to withdraw their support from a project, was a major flaw. Once you decide to withdraw your investment, you would get your Ether back and have the option of making a “Child DAO.” The only rule was that for 28 days your funds could not be accessed. Although the public ledger would be updated, and everybody was satisfied until DAO exploit happened.

The DAO was taken advantage of on June 17, 2016. In order to understand what happened, let’s go back to the splitting feature, which was repeatedly activated to drain the DAO of 11.5 million ETH at the time worth $50 millio. The quantity taken constituted approximately one-third of the DAO Ether.

In the blockchain code, the exploiters discovered a loophole that meant the network repeatedly refunded the same DAO tokens without registering the transactions on the public ledger.

And how did this come about? Well, one major problem was that the probability of a recursive call was not taken into account by the coders of the DAO smart contract. The smart contract was also developed so that ETH will be refunded prior to updating the internal token balance.

The individual or individuals responsible were unable to run into the sunset laden with virtual assets. There came into play the 28-day rule of not being able to reach your funds, which meant that the Ether was not entirely lost. The group was left attempting to pick up the pieces and examine the damage. Eventually, the individual or individuals also stopped draining the DAO, even though they could have persisted.

Also, the problem did not come from Ethereum rather it was an exploited vulnerability within the DAO code, which was created on the Ethereum blockchain network. Nevertheless, it was extremely reputably harmful for Ethereum, and this meant that the team needed to redeem itself quickly.

The problem was the bitter disagreement about how to correct the situation. Many argued that blockchain should be immutable, so nothing should be done. Other virtual assets have been attacked in the past without having to hard fork to reimburse those who have laughed.

A vote was taken after much deliberation within the community about the adopted Ether, and it was decided that the best course of action was to hard fork and reimburse all affected token holders. The hard fork allowed the stolen funds to be sent to an account which could be accessed by the original owners.

This left Ethereum Classic as the initial chain, with the tokens unexpectedly taken from the DAO left untouched with the exploiter. On the other hand, Ethereum was the chain that returned the tokens.

Which is the best digital asset amongst the two?

It’s worth noting that the hard fork was seen as particularly controversial when comparing the two and was hotly debated at the time. However, for many, it was the only way to save the prestige of Ethereum But for some; it was a betrayal of what blockchain technology set out to do: avoid things being exploited on the basis of a human whim.

As a consequence, the ETC group believes that they have remained true to the principle that the blockchain should never be altered. Their network includes the original blockchain showing every transaction, including the exploit. Ethereum critics claim that for any reason considered worthy enough to violate the rules, future forks might end up taking place.

In comparison, the Ethereum group thought they had to take drastic action because so much investor money had been taken, and confidence in Ether was dropping. Ethereum benefited from the encouragement and support of co-founder Vitalik Buterin, who within the community is highly respected and influential.

Ethereum is still more prominent today than Ethereum Classic and has the business backing of Enterprise Ethereum Alliance, which has more than 200 members, including financial heavyweights such as JPMorgan and Citigroup. In 2017, it was home to a flurry of ICOs, it is supported by nearly all crypto currency exchanges, has a wider development team via the Ethereum foundation, and this Ethereum edition is now at the core of decentralized finance.

The Ethereum Classic network has a market cap of around $890 million as of February 2021-a tiny fraction of the $164 billion value of Ethereum. This is partially attributable to how the ETC chose to follow in Bitcoin’s footsteps by restricting the availability of coins to about 210 million. In contrast, at steady rates with no hard limit as to how much digital currency can be mined, Ethereum produces Ether.

Another distinction between the two is that the Ethereum chain will soon be revised to follow a proof-of-stake (PoS) algorithm from a proof-of-work (PoW) consensus system in an improvement known as Ethereum 2.0. This should mean that the Ethereum network will be faster, more efficient, and transactions will be able to scale significantly. As the fork meant that the new blockchain was not backward compatible, many in the Ethereum Classic camp are waiting to see if they would all follow in the same direction.

What’s next for Ethereum and Ethereum Classic?

In December 2020, the largest derivatives marketplace in the world, the Chicago Mercantile Exchange (CME), publicly announced that it will launch Ethereum futures in February 2021. If the United States Commodity Futures Trading Commission (CFTC) signs all off, the future could look even more positive for Ethereum. The derivatives would allow investors to bet on an underlying asset’s future price without actually having to own it.

The future of the Ethereum Classic is not so obvious, and looks less promising than that of the Ethereum. Many developers have lost trust in the network following a series of 51 percent attacks and analysts have suggested that ETC needs to move to a PoS consensus system in order to prevent potential hacks.